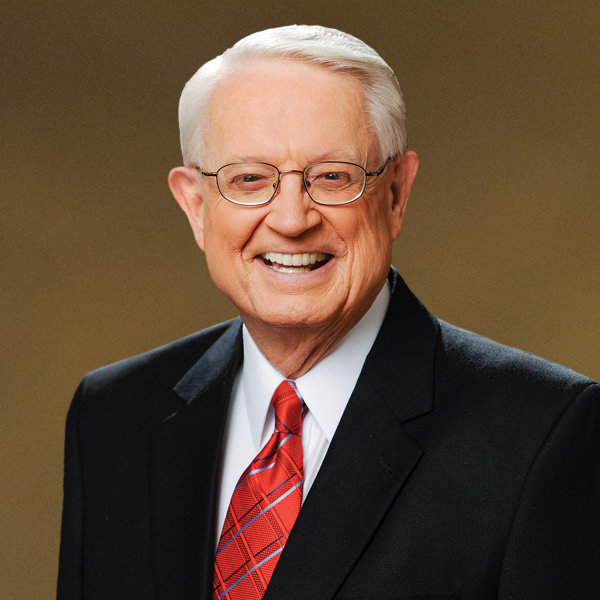 Charles R. Swindoll has devoted his life to the accurate, practical teaching and application of God’s Word and His grace. A pastor at heart, Chuck has served as senior pastor to congregations in Texas, Massachusetts, and California. Since 1998, he has served as the founder and senior pastor-teacher of Stonebriar Community Church in Frisco, Texas, but Chuck’s listening audience extends far beyond a local church body. As a leading program in Christian broadcasting since 1979, Insight for Living airs in major Christian radio markets around the world, reaching people groups in languages they can understand. Chuck’s extensive writing ministry has also served the body of Christ worldwide and his leadership as president and now chancellor of Dallas Theological Seminary has helped prepare and equip a new generation for ministry. Chuck and Cynthia, his partner in life and ministry, have four grown children, ten grandchildren, and seven great-grandchildren.
Call to Ministry

While on the island of Okinawa during his tour of duty in the United States Marine Corps, Chuck recognized that the Lord was calling him to devote his life to the gospel ministry. With Cynthia, his partner in life since 1955, Chuck has devoted himself to the challenge of communicating practical, biblical truth and its application in the context of God’s grace.
Education

After being honorably discharged from the Marine Corps, Chuck enrolled in Dallas Theological Seminary [DTS]. Chuck’s course of study at DTS and the lifelong mentors he met there have permanently marked his life and the course of his ministry.

Harry A. Ironside Award for Expository Preaching
Christian Education Award for the greatest achievement in the field of his academic major
Faculty Award for the most outstanding graduate in the opinion of the faculty

Chuck has also received four honorary doctorate degrees in recognition of his outstanding contributions to ministry:

For more than 50 years, Chuck’s pulpit ministry has emphasized the grace of God alongside an uncompromising commitment to practical, biblical truth and its application. He has served the following congregations in his pastoral ministry:

As a pastor, Chuck has received the following awards:

Clergyman of the Year, Religious Heritage of America, 1988
Named one of the top twelve preachers in the nation by the Effective Preachers Program of Baylor University and George W. Truett Theological Seminary, 1997, 2018
Ranked second to Rev. Billy Graham in a 2009 survey which asked 800 Protestant pastors to name the living Christian preachers who most influenced them (survey conducted by LifeWay Research).

Chuck’s congregation extends far beyond the local church body. Through the Insight for Living broadcast, Chuck’s teaching is on the air in every major Christian radio market in all 50 states and through more than 2,100 outlets worldwide in numerous foreign languages, and it is also available to an exploding online and podcast audience. While Chuck serves as chairman of the board, his wife, Cynthia, serves as president and chief executive officer of Insight for Living Ministries. They have directed its expansion to become one of the leading radio programs in Christian broadcasting. Headquartered in Frisco, Texas, Insight for Living Ministries now has a staff of over 90 employees. We also maintain offices in Boronia Victoria for our Australian listeners, in Brasilia for our Brazilian listeners, in Vancouver for our Canadian listeners, and in London for our listeners in the United Kingdom.

As teacher on Insight for Living, Chuck has received the following awards:

Chuck’s prolific writing ministry has blessed the body of Christ for decades. Beginning with You and Your Child in 1977, Chuck has contributed more than 70 titles to a worldwide reading audience. His most popular books in the Christian Bookseller’s Association include:

Strengthening Your Grip
Improving Your Serve
Dropping Your Guard
Living on the Ragged Edge
Living Above the Level of Mediocrity
The Grace Awakening
Simple Faith
Laugh Again
The Finishing Touch
Intimacy with the Almighty
Suddenly One Morning
The Mystery of God’s Will
Wisdom for the Way
The Darkness and the Dawn
A Life Well Lived
Great Lives from God’s Word series, which includes Joseph, David, Esther, Moses, Elijah, Paul, Job, and Jesus: The Greatest Life of All

Visit our online store for a complete list of Chuck’s books that are available for purchase. You can also sign up to be informed when his next book is published.

As a writer, Chuck has received the following awards:

After serving as Dallas Theological Seminary’s fourth president for seven years (1994–2001), Chuck became the seminary’s chancellor in 2001. As the sixth-largest seminary in the world, DTS’s primary goal is to equip godly servant-leaders for the proclamation of God’s Word and the building up of the body of Christ worldwide, a mission Chuck wholeheartedly supports in his life and teaching. He continues to uphold the school’s motto, “Preach the Word,” as he serves in leadership at Dallas Theological Seminary, at Insight for Living Ministries, and at Stonebriar Community Church.